“We have started 2020 well, because it is built on the successful foundation of 2019”, Tigran Khachatryan’s final press conference 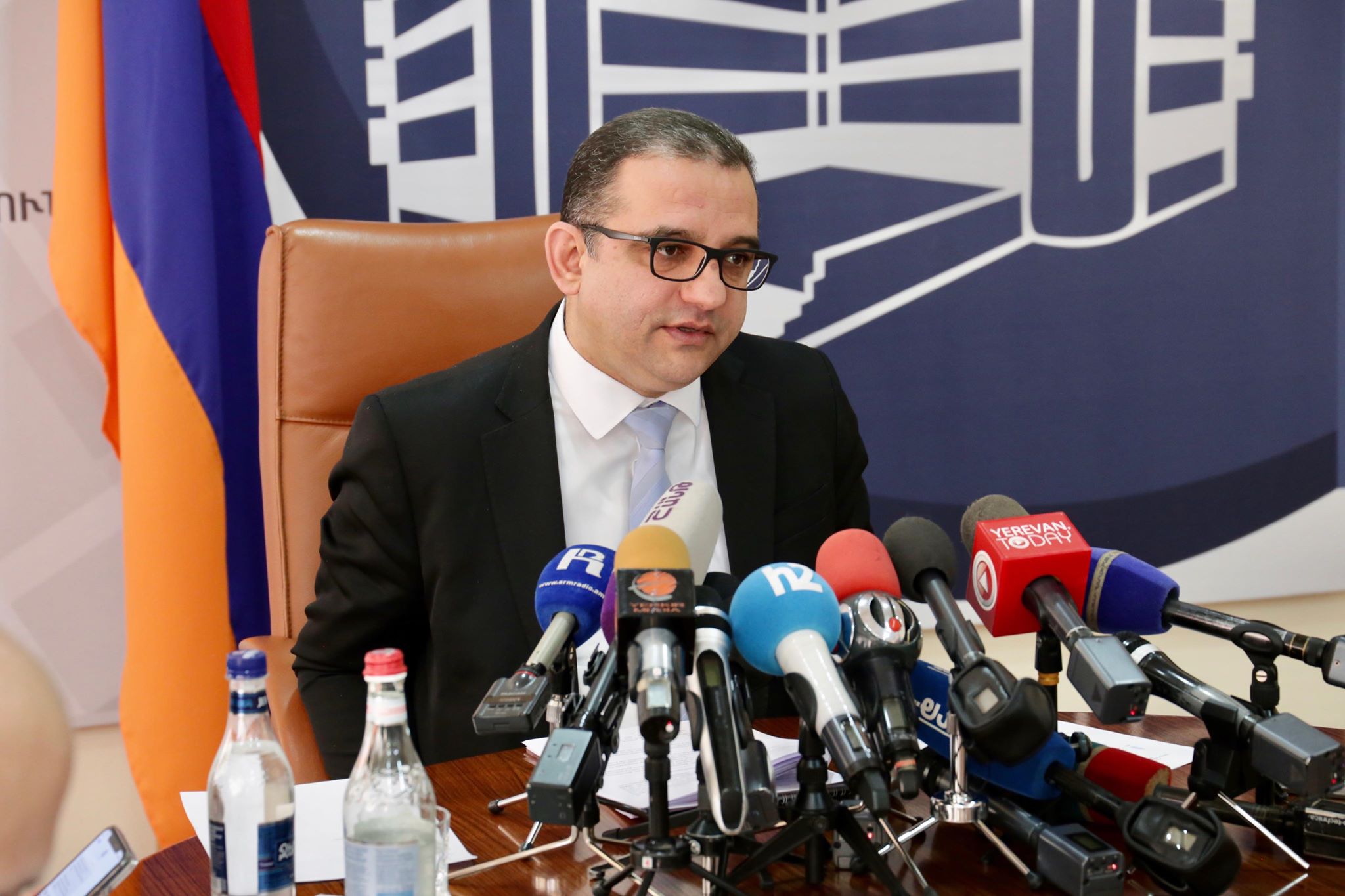 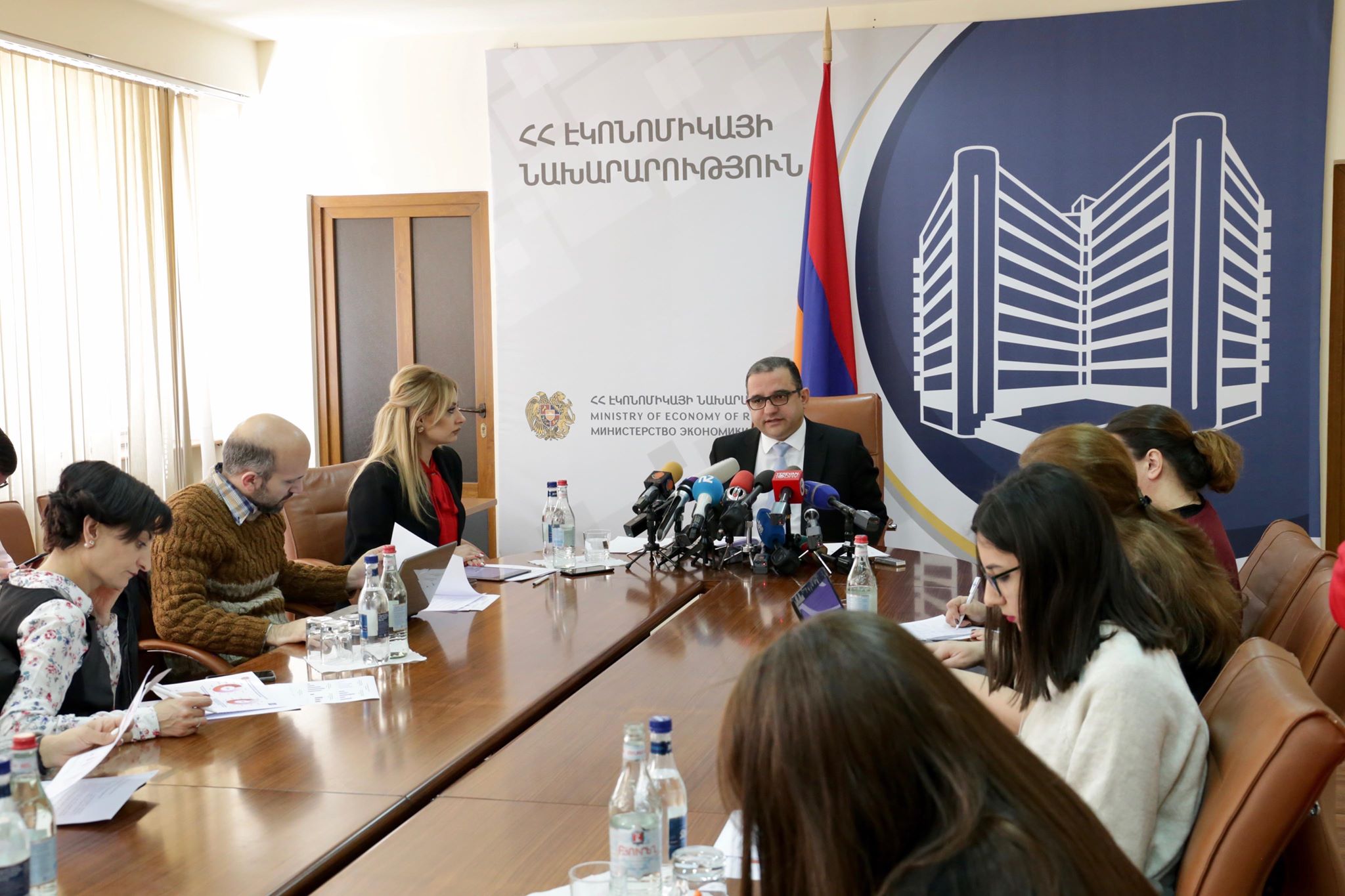 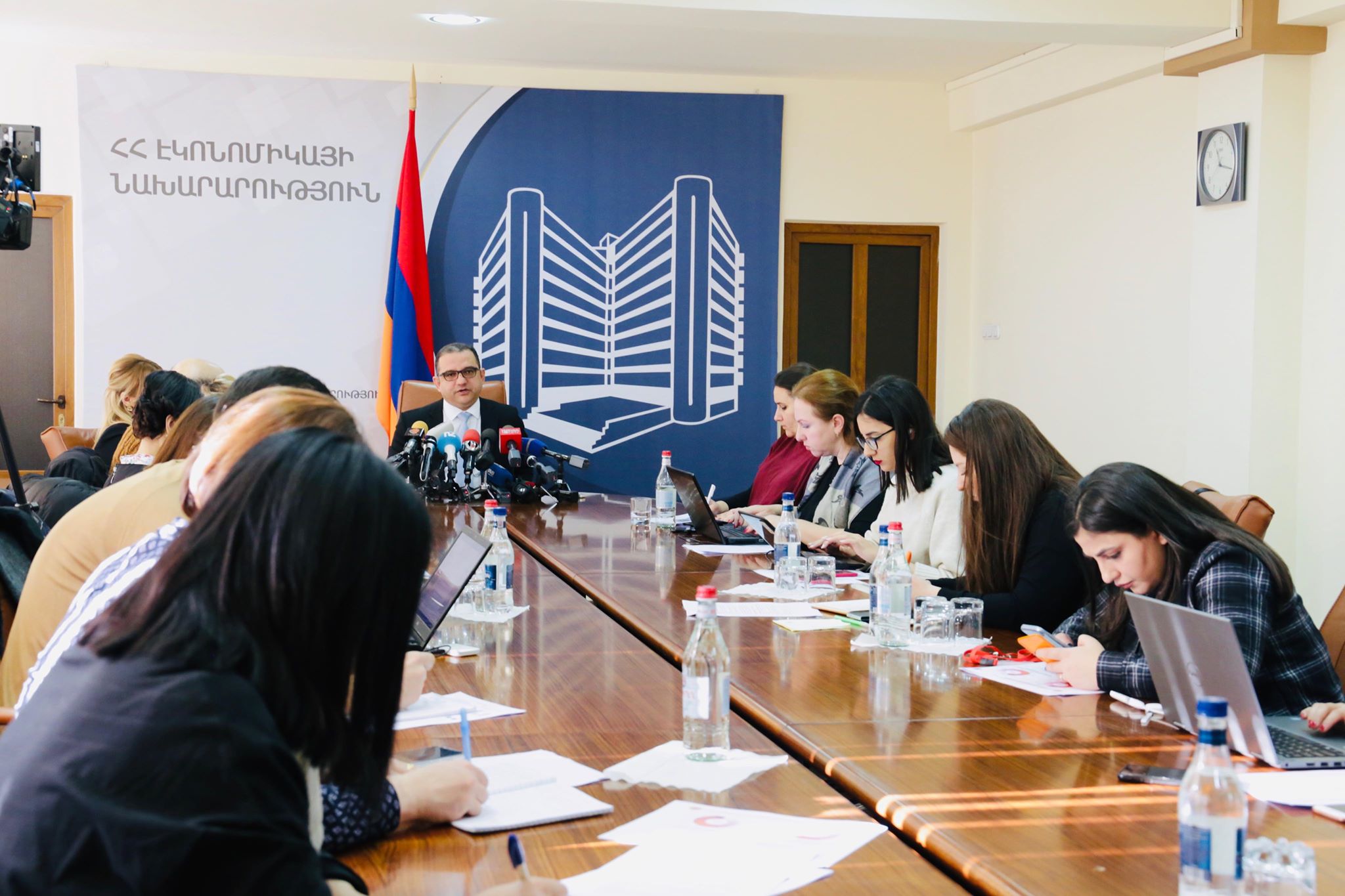 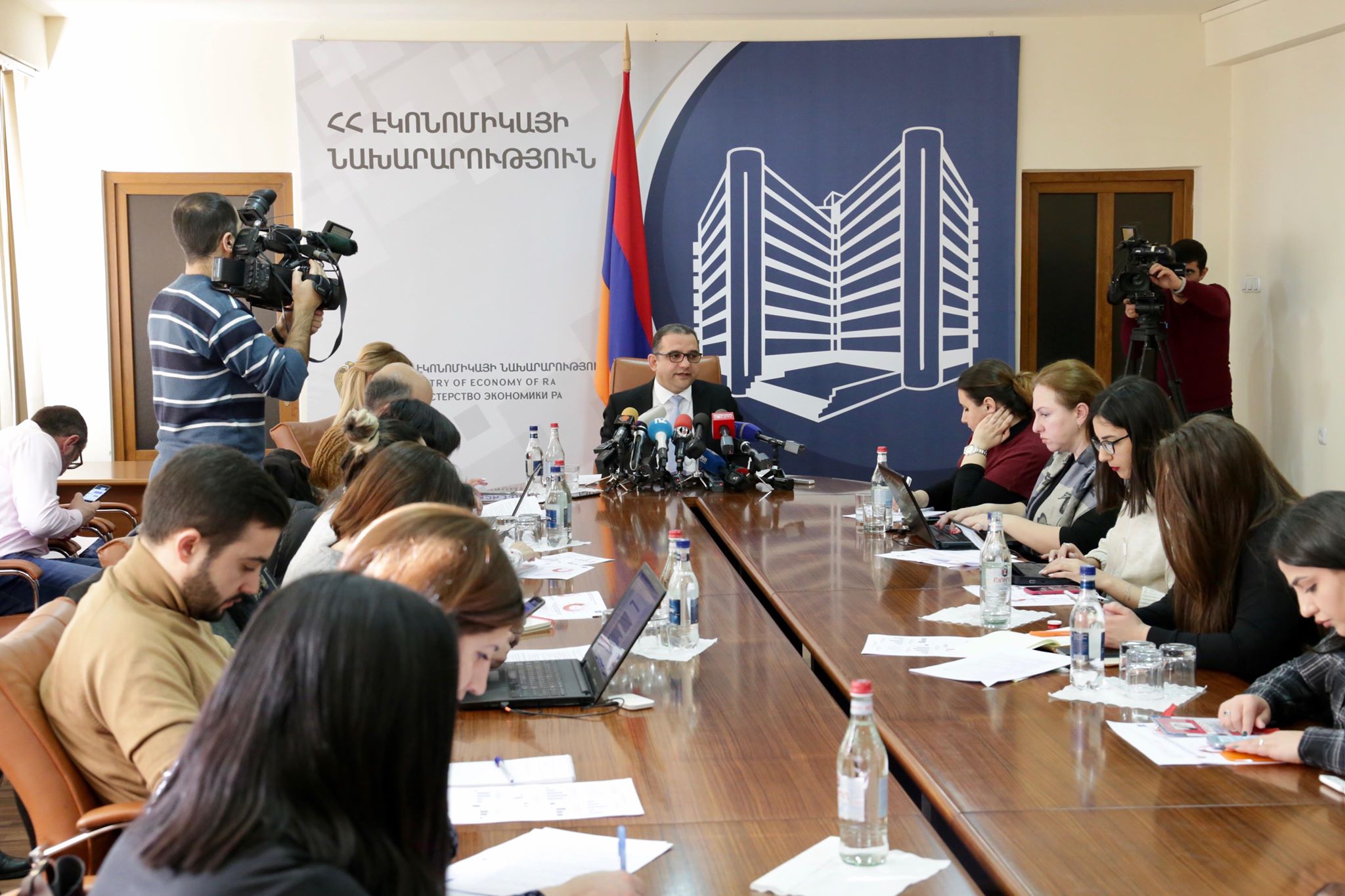 On January 14, 2020, the final press conference of the Minister Tigran Khachatryan on 2019 activities took place at the RA Ministry of Economy.

“We have started a very good year, because it is built on a very good foundation of 2019. According to the data of 11 months of the previous year, the economic activity index is at 7.5%. The growth of industry is especially important. The growth of volume of industrial production in 11 months was 9.3%, while services grew by almost 15%. The domestic trade circulation grew by 9.2%, construction by 4.5%, and exports increased by 9%. This means that, although the annual gross domestic product indicators have not been summarized yet, we can already say that we will have at least 7.5% economic growth.” The Minister Tigran Khachatryan presented the work done by the RA Ministry of Economy in 2019 in the areas of the investment climate improvement, SME development, as well as tourism, agriculture, and other areas.

Activities according to the main functional directions

A strategic plan for modernization of the metrology sector was also prepared.

All the developed documents were submitted for public discussion. The Government has already approved the strategy of the main directions ensuring the economic development of the RA agricultural sector for 2020-2030, by which the following indicators will be achieved in the coming decade.

The SME development strategy for 2020-2024 envisages the following:

2) The official presentation of Armenia’s report on investment policy took place at the UN Conference on Trade and Development (UNCTAD) in Geneva. As a result of the work with the Ministry and relevant study, the experts noted the following:

3)  Following the instruction of the RA Prime Minister, sectoral discussions were initiated with production and exporting organizations in groups representing 12 spheres.

5) Activities are underway to create eRegulations Armenia - the new business support platform, which already describes step by step the 18 most required procedures by investors, thus serving as a guide for entrepreneurs intending to start and expand a business in Armenia.

In 2019, state support programs for the agricultural sector were launched or amended with necessary changes, which are based on improvement of efficiency of agricultural activities and the level of competitiveness of agricultural products, introduction of modern technologies, and alleviation of the financial burden of business entities.

7) The cattle breeding development program for 2019-2024 was launched and within its framework 304 animals were acquired at a total cost of 391.0 million AMD, whereby the subsidized amount was 9.0 million AMD.

8) The state support program on “Construction or reconstruction of small and medium-size “smart” cattle houses and their technological provisioning” was launched. For coverage within this support program 185 applications were submitted by business entities, 24 contracts were signed, and 104 citizens received certificates on completion of training.

9) The state support program on “Development of sheep breeding and goat breeding for 2019-2023” was launched; 203 animals were purchased; one loan was provided at the value of 78.9 million AMD.

13) The program on subsidizing the interest payments on loans provided for installation of hail protection nets in the agricultural sector was also amended this year, a loan at the value of 4.6 million AMD was provided.

14) After certain changes in the state support program on financial lending – leasing - of agrofood equipment, 91 applications were approved at the value of 2,372.9 million AMD, whereby the subsidized amount was 36.9 million AMD. Within the program framework alone, during the current year an investment of around 2.9 billion AMD was made in the agrofood sector and 328 units of equipment were purchased.

15) In 2020, the program on “Subsidizing the interest rates on the loans provided to the agro-processing sector for purveyance (procurement) of agricultural raw materials” was amended and adjusted with necessary changes, 89 applications in the amount of 9.9 billion AMD were approved. Within the framework of approved applications, 8,943 contracts were signed with rural households on the buy-out of the harvest, and the subsidized amount made 315.9 million AMD. Compared to the same period last year, the number of the program beneficiaries increased by around 59%, and the amount of provided loans increased by around 70%. The implementation of the program created a competitive environment in terms of payments against purveyance and for the first time in the last decade the cost of fruits and vegetables and grapes was fully paid out to rural households by the end of December.

18) On November 27, 2019, a memorandum of technical cooperation with a value of $279,000 was signed between the RA Ministry of Economy and the UN Food and Agriculture Organization (FAO) on the land market development through formation of a new legal and institutional framework for issues of non-use of lands, as well as development of a land management toolkit through establishment of land banks.

19) In 2019, 57 programs were approved, the total cost of which is 212 billion AMD, and within this framework exemption privileges for customs duties were granted at the amount of 14.8 billion AMD. It is envisaged to create 3,320 jobs. The value-added tax deferral privileges were also granted to 13 programs, the deferred amounts of VAT constituted 10.1 billion AMD.

20) The participation of Armenian companies in 5 international sectoral exhibitions was ensured in the following areas: home appliances, food processing, shoe production, and jewelry production. As a result, exportation contracts in the amount of around 371.4 million AMD were signed.

21) With a national pavilion, Armenia participated in the 2nd China International Import Expo 2019 in Shanghai, China, presenting the Armenian culture, tourism, the advantages of the Armenian economy, the industrial development perspective, exportation and investment opportunities.

22) In April-October 2019, with a national pavilion, Armenia participated in the International Horticultural Exhibition in Beijing, China, presenting the horticulture and agriculture in Armenia, winemaking, Armenian culture and history, and various videos on Armenia’s tourist attractions were repeatedly shown. The Armenian pavilion won the gold prize at the International Exhibition in Beijing.

24) A study of the gene pool of 420 samples of Armenian grape varieties was carried out, as well as discovery of new varieties and registration of 171 varieties in the Armenian Vitis Database.

Support to the small and medium-size entrepreneurship

25) Legislative amendments were introduced in the RA National Assembly, as a result of which it is envisaged to decriminalize the violations of sale or rules of labeling of unlabeled or non-relabeled goods.

26) An online information and consulting platform for business planning, launching, management, and expansion was set up at www.isc.am, where entrepreneurs can find business-related training materials and videos, as well as industry-related business guides, which will give them an insight on main actions related to service provision or goods production in a given sector, the need for financial resources necessary for establishment and operation, market entry, positioning, and pricing policy.

27) 364 beginner entrepreneurs participated in the “Successful start” courses, of which 238 developed realistic business plans, and 159 were submitted for financial support. As a result of the program, 82 new SME entities were established in 2019.

28) As a result of negotiations with partnering financial organizations in 2019, a new mechanism for provision of loan guarantees to start-up entrepreneurs was agreed and developed, which will lead to a dramatic increase of the number of potential beneficiaries for the assistance provided by the Investment Support Center (ISC) in this area, as well as the threshold of 5 million AMD of the provided loan guarantees will increase to 7 million AMD.

31) For the purposes of exporting under the European Union’s GSP+ regime, 135 companies were registered in the REX system, of which 100 companies registered during this year (product types: canned food, alcoholic beverages, textile goods, precious stones and jewelry, natural and carbonated water, honey, dried fruits and vegetables, etc.). A video guide was developed on how to register in the system, which is posted on the Ministry's website and eRegulations platform.

32) With the assistance of the European Union and EBRD, the first private equity investment fund was launched in Armenia, which will be managed by the international investment company “Amber Capital”. The fund will raise a total of 70 million EUR to invest in small and medium-size enterprises in Armenia to improve the competitiveness of beneficiary SMEs, including also through upgrade of corporate governance and transparency, thus promoting the internationalization of SMEs.

34) The Free Trade Agreement between Singapore and the Eurasian Economic Union was signed, pursuant to which Singapore has the obligation to exempt customs duties for importation of all goods originating in the EEU member states. The Agreement on the “Services trade and investments between the Republic of Armenia and the Republic of Singapore” was also signed, which liberalizes the realization processes on services trade and investments between the two countries and promotes discovery of new markets.

35) The Agreement on the trade and economic cooperation between the EEU and China also entered into force on October 25, 2019, which allows to reduce the market entry barriers for the business entities of the EEU member states and China, as well as increase the regulatory transparency. The EEU-Iran interim agreement, which envisages reduction of Iran’s tariff obligations by up to 75% of the existing customs duties, came into force in October 2019.

36) On October 25, 2019, within the framework of the Eurasian Intergovernmental Council, the Agreement on the free trade zone between the EEU member states and Serbia was signed, the main purpose of which is to create new trade opportunities, as well as provide a preferential access to the markets of the member states of the Agreement.

37) On October 25, 2019, at the effect of activities of the Armenian side, a relevant agreement was signed on avoiding the double hallmarking of jewelry.

38) In order to raise the awareness and recognizability of Armenia, in 2019 the Tourism Committee of the RA Ministry of Economy invited more than 50 media representatives and bloggers from different target markets to visit Armenia, in particular, from Russia, Germany, Italy, Switzerland, USA, Poland, and Israel. As a result of these visits, there were more than 5 million views about Armenia and more than 50 articles were published.

39) With the support of the Tourism Committee of the RA Ministry of Economy, the presence of the official pavilion of Armenia at the following 4 prestigious international exhibitions was ensured.

40) In order to improve the tourism statistics with the help of the Border Management Information System (BMIS), an appropriate software is developed, which will allow to ensure maximum accuracy in collecting data on the number of tourists visiting Armenia, including their citizenship, age, sex, border crossing points, as well as detecting the number of repeated visits within the number of total visits.

41) With the support of the Tourism Committee, 5 traditional festivals were organized in the regions of the Republic of Armenia, whereby each of these festivals was actively attended by the local population and that of the neighboring communities, domestic and incoming tourists.

42) Within the framework of the World Bank’s “Local Economy and Infrastructure Development” Project, repair works of roads leading to the main tourist destinations or infrastructure adjacent to the tourist attraction sites were approved and are under implementation in 6 Marzes of Armenia. The construction works of roads leading to the tourist attraction hubs of the “Symphony of stones” in Garni, the Dendropark in Stepanavan, Kumayru Street in Gyumri, and the monastery complex of Tatev are finalized. In 2020, large-scale construction will begin for improvement of tourist sites.

Export to the EU under “GSP+” REX

One Stop Shop for Investors

Feedback with the ministry staff officers

Electronic Government of the Republic of Armenia

The rank of Armenia in the international ratings

National Center of Innovation and Entrepreneurship

The union of manufacturers and businessmen of Armenia

Chamber of Commerce and Industry of the Republic of Armenia